The SEC is considering options to deal with companies that choose to go public through reverse mergers. 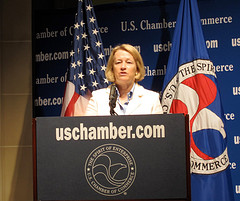 Speaking at The Wall Street Journal’s CFO Network forum in New York, Securities and Exchange Commission Chairman Mary Schapiro told attendees that the SEC is considering several options to address its concerns about reverse-merger companies that use backdoor methods to go public in North America.

She declined to provide details, but said the SEC is weighing “a menu of ideas” that aren’t “ready for prime time, yet.”

I have noted in prior blogs that SEC officials have said they are increasingly concerned about the proliferation of small private companies that elect to merge with public shell companies in lieu of more rigorous methods of becoming public, such as using our Go Public Direct transaction structure. As I pointed out, the SEC warned investors to be careful about investing in stocks of such companies.

Ms. Schapiro cited a proposal floated by Nasdaq OMX Group Inc. as one an example that would require a certain amount of trading before a company could list on its exchange.

According to the Wall Street Journal:  Since January 2007, there have been 600 backdoor registrations, with more than 150 from in and around China, SEC officials have said. The SEC has warned of systemic concerns with the quality of the auditing of these firms’ financial reporting as well as the limitations on the ability of regulators to enforce the securities laws and for investors to recover losses tied to fraudulent disclosures.

I again caution all companies considering going public in this climate to carefully assess all options before picking the backdoor reverse merger process that continues to draw increased regulatory scrutiny.