As a long-time advocate of Go Public Direct, or self-underwriting, being the preferred method to go public in the U.S., we strongly agree with the sentiments of the SEC on this subject.

These sentiments were expressed in a speech by SEC Commissioner Luis A. Aguilar on Facilitating Real Capital Formation given at the Council of Institutional Investors Spring Meeting, Washington, D.C., recently.

We particularly agree with the following excerts from a speech by the Commissioner published here: 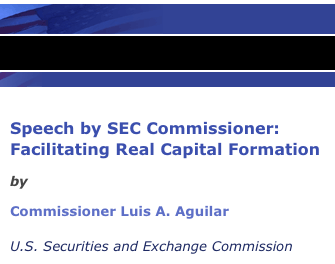 In recent years, we have seen a spike in private companies merging with a public shell company as a way of going public. While it is Chinese companies that have grabbed recent headlines, the problems coming to the forefront would not necessarily be limited to companies based in China.

There are a lot of different ways for companies to access the public markets, but not all of them are equal. They differ in the quality of the disclosures,the time investors and the SEC typically have to consider them, and the protections that investors have against false and fraudulent statements.

The traditional IPO remains the gold standard. In a traditional IPO, the SEC and the public receive robust disclosures, along with the time to review and consider them, backed up by real liability that puts the risk of false statements on the people in the best position to ensure accuracy, not on the investors. In addition, underwriters and auditors engage in due diligence which enhances the disclosure quality.

The Commissioner went on to note how the problem applies particularly to Chinese companies:

Since January of 2007, there have been over 600 backdoor registrations. Over 150 of these have been by companies from China and the China region. Notwithstanding the SEC rulemaking of a few years ago to respond to abuses involving shell companies, we are seeing increasing problems. While the vast majority of these Chinese companies may be legitimate businesses, a growing number of them are proving to have significant accounting deficiencies or being vessels of outright fraud.

As just one example of this phenomenon, two companies that were numbers 1 and 2 on the Investor’s Business Daily 100 have now been shown to have significant issues. One of these companies had to restate its earnings and was delisted just last week. The other has admitted that at the very least two of its manufacturing contracts didn’t actually exist. Just last Friday, the SEC suspended trading in another Chinese company that became public in the United States through a shell. This was the second SEC trading suspension imposed on Chinese companies in this situation in the month of March alone. Additionally, NASDAQ and NYSE Amex have recently suspended trading in several of these companies.

I support all of the efforts to address these problems. The SEC staff has been working collaboratively and tirelessly with many others to investigate and shed light on this situation. It has been widely reported that the SEC set up an internal task force to investigate fraud in overseas companies with listings on U.S. exchanges, with particular emphasis on companies engaging in these mergers to achieve backdoor SEC registration. The staff’s hard work has yielded, and will continue to yield, results.

Reduce the risk of an SEC investigation by the reverse merger task force.  Instead, we strongly urge all companies, U.S. and foreign, that are considering going public by reverse mergers to contact us to learn more about the advantages of our Go Public Direct method.